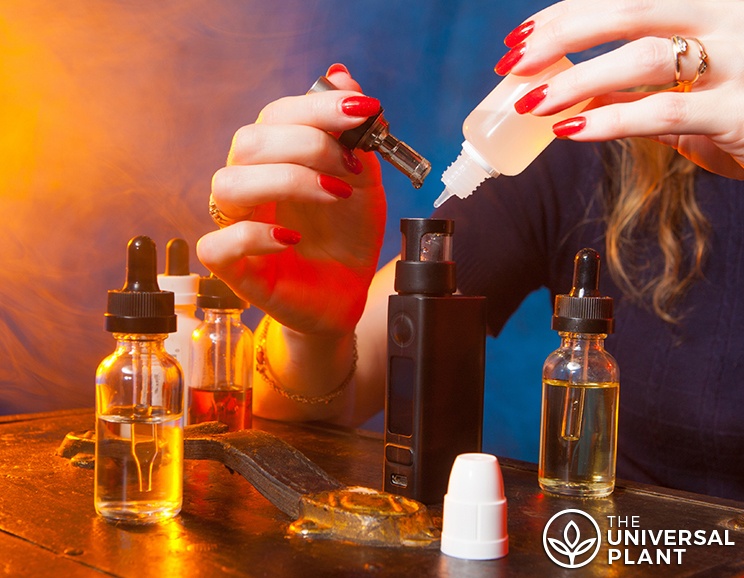 If you have read our previous posts, then you’re probably more than familiar with CBD oil (i.e. CBD tinctures). It’s the most prevalent and beginner-friendly CBD product out there. However, you also have a choice of CBD edibles, topicals, and not to mention a range of dabs for vaping. CBD vape oil is a popular choice for individuals comfortable using a vape pen. If you want to explore beyond the typical CBD tincture, then consider what benefits vaping oil may offer.

What Is CBD Vape Oil?

CBD vape oil is not a whole lot different from the conventional CBD oil. Whereas the latter is intended for oral ingestion, vape oil is for – as you can probably guess – vaping with an e-cigarette or other type of battery.

Can’t you just vape regular CBD or hemp oil tinctures? Yes, you can and some people have actually tried it. However, just because you can do it doesn’t mean you should. The carrier for CBD tinctures isn’t optimal for use with a vape pen. The carrier is usually PG, VG, hempseed oil, coconut oil or other MCT oil, which are sometimes too viscous for an e-cigarette’s heating coil to effectively burn.

CBD vape oil has a thinning agent, which we will discuss in the next section.

Most people who have attempted to use regular CBD oil intended for oral in a vape pen have reported a foul taste. It also leaves a residue on the heating coil, which becomes a hassle to wash off.

Likewise, just as it’s not optimal to vape regular CBD oil, it’s also not optimal to ingest CBD oil intended for vape. Again, you can do so, and some people mix the e-liquid with a beverage like apple juice or an energy drink. However, oral ingestion is not optimal for reasons we will get to later on.

The lesson? Use CBD products in the manner they are intended for. Sometimes the product is actually made for multiple forms of delivery. If this is the case, the product packaging will say so.

How Is CBD Vape Oil Made? For the most part, CBD vape oil is made the same way as regular CBD tincture oils. We suggest seeing our primer on CBD oil, which includes a section on how dispensaries produce the extract that is used for all CBD products.

Essentially, manufacturers use ethanol or grain alcohol (or some other solvent like CO2 or butane) to extract the CBD and/or other cannabinoids. A carrier oil is added along with additional ingredients like flavoring and, if lost during the extraction process, terpenes.

CBD vape oil is pretty much the same. However, to make the solution 100% vapepen–friendly, most manufacturers add a thinning agent. This includes one of two primary thinners: vegetable glycerol (VG) or propylene glycol (PG).

Some people opt for homemade concoctions by mixing their own CBD oil, thinner, and other flavors. However, it takes tons of experimentation to find the right formula that not only works well with your battery but also tastes great and produces the desired effect. We recommend first-time users stick to professionally-made CBD vapes.

Occasionally, manufacturers will add nicotine to their CBD vape oil. This is where users have to exercise some due diligence. The reason a CBD vape may include nicotine is because it provides a safer and tobacco-free alternative for cigarette smokers. A study1 found that smokers that vaped CBD decreased cigarette smoking by 40%. A second group that vaped a placebo did not decrease their number of cigarettes smoked.

Unless you smoke and are trying to wean off this nasty habit, we suggest sticking to nicotine-free vape oils. If you go to any of the retailers we recommend, you won’t have to worry about nicotine. However, if you go to a more recreation-friendly establishment, you may have to beware of added nicotine.

Why should you vape CBD when it’s less of a hassle to just ingest it?

It all comes down to bioavailability. When you ingest anything, whether it’s food, medicine, or whatever, a sizable portion of the compounds will be destroyed by your stomach acids.

A study2 found that oral CBD oil has a bioavailability anywhere from 6% to 20%. This means if you consume 100 mg, only 6 mg to 20 mg will reach your bloodstream and interact with the endocannabinoid system and CB receptors.

This is why CBD oil makers recommend ingestion via sublingual consumption. This is where you place the drops under your tongue and let the contents dissolve. The mucous membranes absorb the oil, allowing it to bypass the digestive system. This is believed to increase bioavailability by an estimate of up to 35%.

What about vaping? When you inhale CBD as vapor, the contents directly enter the lungs where it diffuses into the bloodstream. The bioavailability is far higher than any ingestion method. According to the aforementioned study, the absorption rate is about 56%. Another study3 yielded a more modest rate between 34% to 46%.

Either way, you get more bang for your buck.

Is CBD Vaping Bad for Your Health?

Are there health risks associated with vaping CBD? Can something generally good for your health have hidden dangers?

This is a common concern. While drastically different from smoking, the two are similar in the sense that you’re inhaling vapor into your lungs.

There have been several reports of users falling ill after vaping CBD, the effects of which were not observed in users that ingest the oil.

In early 2018, the U.S. Army released a warning cautioning against the use of CBD oil vape. The notice came after 60 soldiers were hospitalized and treated for dizziness, disorientation, and seizures. The hospitalized soldiers were regular e-cig users. It’s believed the soldiers used a vape oil containing synthetic cannabinoids.

Another concern is that lower-grade vape oils may contain cuticle wax. This is the outer fatty layer that covers much of the cannabis plant’s surface. Cuticle wax is also found in hemp plants. When you smoke marijuana as a joint or bong, the heat burns away the oil, making it a non-health hazard.

However, vaporizers utilize heat at a much lower temperature. The cuticle wax may not completely burn away. This leaves behind waxy remnants that may make their way into your lungs. While there are currently no studies confirming such, it’s speculated that the wax forms into solid granulomas inside the lungs. This may lead to long-term respiratory diseases.

Is This a Cause for Concern?

With reports of servicemembers falling ill and the potential health ramifications of cuticle wax, is it safer to stick to CBD tinctures? We don’t believe so. We do believe, though, that the risks are all the more reason to acquire CBD vape oils from a reputable supplier.

Certified dispensaries and CBD makers only use natural hemp extracts and never artificially-produced cannabidiol. As far as cuticle wax is concerned, determine whether the manufacturer uses a process called winterization. This is a method that removes any oil from the plant that contains higher melting points.

Call the company to confirm whether they winterize the oil. If the representative is unable to answer the question or doesn’t even know what winterization means, then we suggest looking elsewhere. As always, you won’t have to worry about this if you go with one of The Universal Plant’s recommended CBD manufacturers.

Use a High-Quality Vape Pen

Inferior batteries produce far more heat than necessary. The vape pen’s heating coil should produce high temperatures, but not so high that it over sublimates (vaporizes) the thinning agents. When the thinning agent propylene glycol is exposed to extremely high heat, the molecules break down and convert to carcinogenic compounds, most notably formaldehyde. This is one of the cancer-causing properties in cigarettes.

As a general rule, we don’t like to recommend vape products with PG in it, even if the manufacturer advertises a VG/PG split of 70/30.

Aside from CBD vape oil, you may also have heard of CBD vape juice, which is also intended for use with a vaporizer. Is there a difference? The two terms more or less describe a class of e-liquids containing either CBD isolate or full-spectrum CBD extracts.

We suggest seeing our article on CBD vape juice. Manufacturers for the most part treat the two terms interchangeably. There’s no need to get caught up in the semantics. They both refer to CBD e-liquids that you vape instead of ingest or pour on your food.

Where Can I Find CBD Vape Oil?

As we mentioned, we cannot overemphasize the importance of obtaining CBD vape oil from an established brand. The links below are brands we have vetted ourselves and meet our smell test.

Like CBD oil, most CBD vape is made from hemp. You have no worries regarding risks for intoxication by THC content. E-liquids are also available as pure CBD extract or full-spectrum.

CBD oil vape provides a more bioavailable alternative to CBD oils. While we recommend beginners start with the latter, you may eventually choose to upgrade and explore other modes of administration that better fit your situation and preferences. Rest assured that vaping is safe as long as you follow dosage recommendations and stick to trustworthy suppliers.